It’s a new dawn for the women of Sierra Leone after President Julius Maada Bio assented into law on 19 January the Gender Equality and Women’s Empowerment Bill 2021, which will be implemented alongside the Customary Land Rights Act 2022, allowing women the same rights as men to own, lease or buy land in the country.

The law is a huge leap forward in including women in the development of the West African country’s real estate sector, which, because of deeply rooted cultural norms, has been under the control of men.

Although the Devolution of State Act 2007 gave women the legal right to inherit land, in reality, they have been blocked from the decision-making process in land ownership by customary laws that require women to take a back seat and be represented by their husbands at the decision table.

“Any customary law that excludes, limits or inhibits women from owning, holding, using, transferring, inheriting, succeeding to or dealing with land subject to customary law shall be void,” states the Customary Land Rights Act signed into law last August.

But women who have attempted to fight for their land ownership rights have previously been exposed to violence from men, with many traditional norms enforced to silence them, calling for a new law that now promises to create gender parity in all spheres of economic development.

The civil war escalated violation of women’s rights
The 1991-2002 Sierra Leone Civil War made the situation worse, with men orchestrating mass violation of human rights against women, further relegating them to the status of second-class citizens with diminished rights.

“The rebels burned our schools, raped and impregnated our women and girls. They destroyed us,” Sally Adams, president of Women’s Forum Sierra Leone told Quartz.

Maryann Kaikai, who runs a fashion business in Freetown, told Quartz that the tendency by men to frustrate women who try to own land in Sierra Leone has been a huge challenge for women seeking self-determination in property ownership. “They will do everything to try to repossess the land,” she said.

About 70% of Sierra Leoneans live in rural areas and women comprise 52% of the country’s population.

In Sierra Leone, 83% of the owned land belongs to the family, with customs requiring that the oldest male hold the land in trust or with a paramount chief being the holder of communal land. At least 95% of its land is governed by customary law which prevails where there is no statutory law. That has made it difficult for women to own land.

But years of advocacy through various women’s associations in the capital, Freetown, and upcountry, the Ministry of Gender, the Office of the First Lady, and UN Women birthed the drafting of the bill in August 2021. It went through the necessary parliamentary readings till it was passed into law.

You could be jailed for five years for discriminating against women
Women can now be appointed paramount chiefs, with the new law demanding a 30% representation in public and private offices.

The act states that a person who discriminates in providing access to land resources, based on gender “commits an offence and is liable on conviction to a fine of not less than $2,600 or to imprisonment for a term not less than five years or both”. 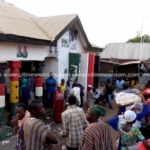