Wildflowers grazed my legs as I hiked down from the volcanic-rock hilltop fortress of Pitigliano into the Tuscan valley below. At the base of the hill, I crossed a burbling stream and followed a winding trail as it inclined. All of a sudden, I was walled in.

Huge blocks of tuff, a porous rock made from volcanic ash, rose as high as 25m on either side of the trench I found myself in. I felt spooked – and I’m not the only one who’s felt that way in vie cave like this. These subterranean trails have been linked with lore of devils and deities for centuries.

“When we were kids, nobody really went there,” said Elena Ronca, a hiking guide who has been leading tours around this area of Tuscany, where she grew up, for 12 years.

That’s because there wasn’t much information about the trails, nor about the Etruscan civilisation that built them. The ancients didn’t leave road maps or written records, and many pathways were abandoned and overgrown with shrubs. But in the last few decades, archaeological discoveries in tombs across central Italy, and as far as Corsica, have revealed more about the Etruscans and their mysterious vie cave, which are said to connect the land of the living with the land of the dead.

At their simplest definition, vie cave (via cava is the singular) were walled pathways used to travel from the highlands to the riverbanks and vice versa. While they’re found in various places across central Italy (where the Etruscans thrived from 900 BCE to about 700 CE until they were absorbed into the Roman Empire), the vie cave here in southern Tuscany between the towns of Pitigliano, Sorano and Sovana are among the oldest andmost intact. “It’s incredible that the vie cave have lasted so long,” Ronca said. “During the Etruscan times, they knew what they were doing.” 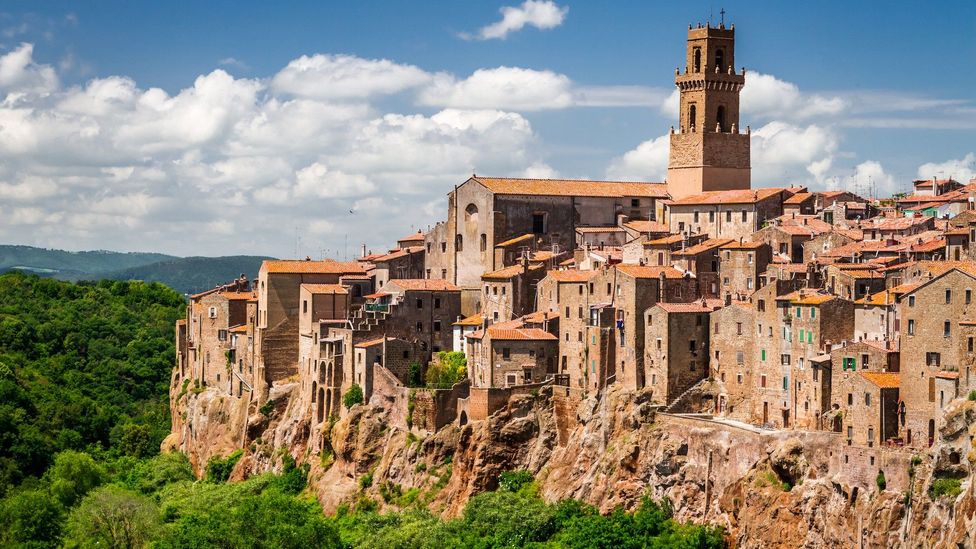 The vie cave in Pitigliano are among the oldest and most intact (Credit: Shaiith/Getty Images)

On my hike through the area, each vie cave I walked was different than the next. Some were narrow, with walls not much taller than me, and finely cut stairs. Others were lush jungles of moss and ferns contained by giant walls, or residential roads wide enough to fit a car or two.

Originally, Ronca explained, the vie cave were carved only a few feet deep, using a rock-cutting technique first seen in ancient Egypt that involved drilling a hole into the tuff, inserting a piece of wood and then filling the hole with water. The wood would expand, forcing the tuff to fracture. They would do this again and again, lengthening and deepening the road to its desired size. “It’s not a simple and easy technique,” she said.

Over centuries, the vie cave were further altered by various empires, including the Ostrogoths, Lombards and Franks, that used them to suit their needs. At some unknown point along the way, stairs were added and ravines were deepened, but even the original vie cave had a way to channel out the rainwater: in each path I walked, I could see some form of water trough system cut into the tuff rock to prevent erosion and drain rainwater. “Etruscans were extremely skilled hydraulic engineers,” Ronca said. “We know that they levelled some lakes and then drained huge wetlands in order to have lands that were possible to farm.” 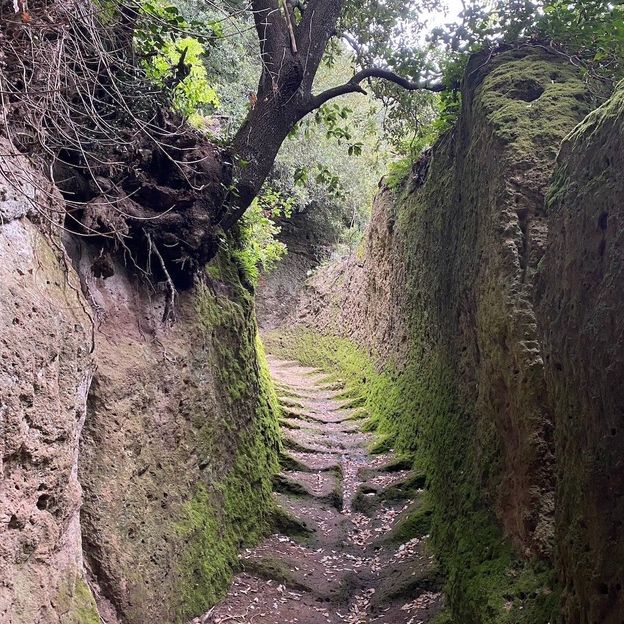 Some cave roads are narrow, with finely cut stairs; others are lush jungles of moss and ferns contained by giant walls (Credit: Joel Balsam)

As I continued my hike, I came across deep diagonal pits with rock monuments above them that appeared to be carved by human hands. These were Etruscan necropolises, with tombs for individuals or families cut deep into the tuff and filled with gold, food and clothing for safe passage into the afterlife.

Unfortunately, many Etruscan tombs in the area were robbed long ago. As English writer D H Lawrence wrote in Etruscan Places after a visit to Tuscany in the 1920s: ”to the tombs we must go: or to the museums containing the things that have been rifled from the tombs”. But historians like Luca Nejrotti, an archaeologist working with the Italian government in the region, have managed to find pottery and painted frescoes in the necropolises that may answer some questions about Etruscans and their vie cave. “Most of the Etruscan tombs have been robbed since ancient times, but the robbers used to take just the gold,” he said. “So, for archaeologists, it’s quite interesting because you can still find pottery and stuff that is really, really important for the historical research,” he said.

Etruscans’ traditional tomb frescoes didn’t last in the Pitigliano area, since paint doesn’t stick to tuff very well, but by studying famous frescoes in necropolises like the ones beneath the city of Tarquinia, in the province of Lazio, along with artefacts in Tuscany, Nejrotti believes that vie cave might have hosted celebratory funeral parades, complete with food offerings, dancing, musical instruments and even public sex. Some historians posit that this could be because Etruscans believed life continued after death and the vie cave were pathways to the afterlife. “Etruscans believed that the trees were gods, they believed that the rivers were gods, and the main important gods were underground,” Ronca said. “So probably the idea of digging vie cave through the rock was a way to connect with these gods, but we are not sure about that.” 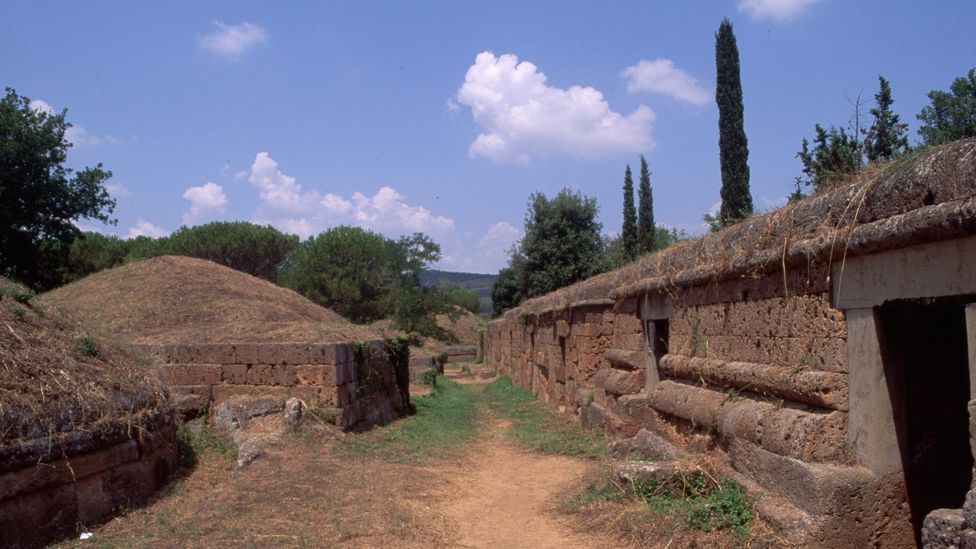 At Etruscan necropolises such as Cerveteri, tombs were filled with gold, food and clothing for safe passage into the afterlife (Credit: Franz-Marc Frei/Getty Images)

Interestingly, the artefacts also suggest that women and men were equal in Etruscan society, which is different than how the Romans behaved: in sculptures and paintings, women are depicted as being not only welcome but active participants at banquets and social gatherings; inscriptions indicate that women could inherit property and kept matronymic names (Roman women took their father’s or husband’s name); and the Sarcophagus of the Spouses, found in the Etruscan necropolis in Cerveteri, shows a man and woman held in equal status.

“Roman women were just the mother of the family – they had lots of power, but inside the house,” Ronca said. “On the contrary in the Etruscan world, females were almost [the same] as men; they could rule a family, they could rule a town. We have some magistrates that were women.”

For both Nejrotti and Ronca, the most interesting theory suggested by artefacts and archaeological research is that Etruscans seem to have had a limited impact on the environment compared with the Romans, who frequently razed land, rerouted rivers and flattened hills. For instance, the vie cave caused comparatively little detrimental impact and were made using materials found in the area – possibly because the Etruscans believed certain natural features (like trees and rivers) were gods and that man was connected to nature. 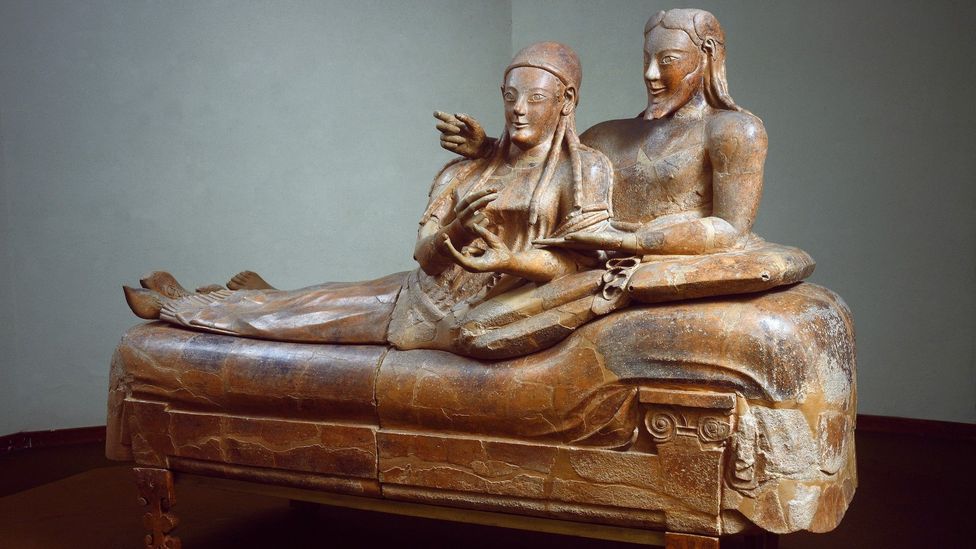 The Sarcophagus of the Spouses, found in the Etruscan necropolis in Cerveteri, shows a man and woman held in equal status (Credit: Leemage/Getty Images)

“The Romans used to be more aggressive with the environment and they used to change the landscape more deeply,” Nejrotti said. “You can see that the traces that the Etruscan people left in the landscape were quite soft, maybe this is something we can learn from them.”

As my hike ended in the town of Sovana, a former Etruscan city that has long been built over, I wondered why I knew so little about Etruscans and their fascinating vie cave, while I knew a ton about Romans. According to Ronca, I shouldn’t feel bad. “Italian people, not only European or American people, nobody knows about them,” she said. “At schools, they still don’t teach about the Etruscans… They are really underestimated and undervalued.”

But that is starting to change. Ronca said that in the past five to eight years, and especially during the pandemic lockdowns when Italians spent more time exploring their own regions, vie cave and their necropolises have grown in popularity. “Ten years ago, I had to force people to come and see the vie cave,” Ronca said.

Soon perhaps, vie cave will be as busy as more well-known Roman historical sites, but if they do, Ronca hopes we will do our best to preserve them.

Kodak Black goes off on fan for recording him, mentions the death of PnB Rock
Next Article

Flying restrictions imposed over London and Windsor on Monday