Two weeks after Egyptian intelligence chief Abbas Kamal visited Sudan, the unannounced visit by his Turkish counterpart, Hakan Fidan, brought a flurry of speculation about secret deals and the purpose of yet another spy chief visiting Khartoum. Fidan’s visit was a rare occurrence for Khartoum given Turkiye’s “watch and see” approach it adapted after the fall of former President Omar Al-Bashir. Shortly after the takeover by the Sudanese Army, Turkiye was seen as the state equivalent of a “persona non grata”, having earned the wrath and distrust of the Sudanese revolutionaries.

Indeed, Turkiye’s decision to give refugee status to many of the former National Congress Party (NCP) leaders, including one of Sudan’s former intelligence bosses, implicated Ankara as the “aider and abetter” of the former regime members suspected of crimes including absconding with the country’s wealth. Turkiye’s lukewarm response to Al-Bashir’s removal was in sharp contrast to other countries, which almost “warmly welcomed” his departure. “Turkey’s president voiced hope that Sudan will handle its current process peacefully, in a spirit of national reconciliation,” reported Anadolu.

Four years on, commentators say that Fidan is just as keen to protect Turkish interests in the current political climate. The intelligence chief would like to be well-positioned in the event that a political agreement is reached. Although Turkiye is not involved directly in any such deal, Ankara is watching keenly.

Moreover, observers say that Ankara wants to revive the plan to lease some 315,000 hectares (almost 780,000 acres) of agricultural land in Sudan that it had secured for 99 years. In September 2018, the state-owned Turkish Petroleum Corporation signed an oil-exploration deal in Sudan that amounted to $100 million. Had it not been shelved, Turkiye’s most important geopolitical and strategic involvement would have been to develop Suakin Island, which some believe is the stage for the creation of a military base. Turkish Defence Minister Hulusi Akar visited Khartoum in 2018 to arrange to lease the island. Suakin is located strategically on the Red Sea near the Gulf of Aden and Saudi Arabia. However, Khartoum and Ankara have always denied plans that it would be turned into a military base.

In addition to Turkiye’s interest in Sudan, it is understood that the intelligence chief wants to ensure that the government in Khartoum is on board with plans for Turkish efforts to support the UN-backed government in Libya. Sudan is aware that Turkiye needs Khartoum to give political support to Ankara’s official intervention in the North African state.

President Recep Tayyip Erdogan signed a memorandum of understanding covering territorial waters with the Government of National Accord (GNA) in Tripoli on 27 November, 2019. In exchange, the internationally-recognised government allowed Turkiye to deploy troops in Libya.

A few weeks later, on 2 January, 2020, the Turkish parliament approved an official intervention in Libya and Ankara duly deployed Bayraktar TB2 drones and several dozen officers to operate them on behalf of the GNA. Its drone technology was used very effectively to push back the offensive of warlord General Khalifa Haftar, who at the time was being supported by the UAE and had threatened to enter the Libyan capital.

In the past few months, the UN has been determined to remove mercenaries involved in the war in Libya. They include fighters with Russia’s Wagner Group, Syrian mercenaries sponsored — it is alleged — by Turkiye, some fighters from Chad and well-known rebel Sudanese fighters from the Darfur region who are aligned to the Rizeigat tribes involved in the breakaway government in Eastern Libya.

That alignment also appears to feature Suliman Arcua Minnawi, known as “Minni Minnawi”, the head of the Darfur Government and leader of a faction of the Sudanese Liberation Army, whose tribesmen continue to provide mercenary services to Haftar. The hope is that the Sudanese intelligence officials, including Deputy President Mohammed Hamdan, the leader of the Rapid Support Forces, can use their influence to persuade rebel tribes to end the hostilities in Libya’s eastern territories.

Whilst it remains unclear if the Turkish government will be able to meets its objectives, the link between the Turkish and Sudanese security forces is a close and important relationship that ensures that Ankara continues to position itself in the Nile Basin, the Sahel region and on the African continent in general. Ultimately, observers expect a few more unannounced and secret visits between Ankara and Khartoum.

The views expressed in this article belong to the author and do not necessarily reflect the editorial policy of Africa News 360. 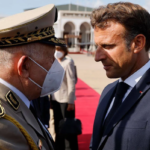