chirping birds, a cool breeze, huge trees and gushing water welcome Anyam Sridevi and her family to the Pallalamma temple in Andhra Pradesh in southern India. They are carrying colourful baskets filled with flowers and food – offerings to the goddess Pallalamma Devi.

Contents
The community believe that if they protect the grove, the deity will protect them – Sathish Battrahalli NarayanappaCARBON COUNT

“Many childless couples visit the Pallalamma temple; they believe that they will be blessed with a child,” says Anyam Rambabu, a staunch follower and frequent visitor to the temple.

In the temple there is a modest idol of the goddess, sitting cross-legged in a small alcove under a huge Banyan tree. Devotees believe that their families will be blessed with health and prosperity if they offer fruits and seek her blessings. Pallalamma Devi is also popularly known as the Nature Goddess, because of her close affinity to the natural world.

Religious practices have preserved an estimated 100,000-150,000 sacred groves across India, ensuring they remain biodiverse habitats home to an array of endangered species. Scientists say cultural traditions and community leadership are playing a critical role in boosting conservation efforts and increasing green cover in India, which is losing forests at an alarming rate.

“It’s something which is ingrained into every Hindu worshipper: temples, trees and ponds are all meant to be a collective space of worship,” says Lakshman Acharya, the temple’s priest.

Tree worship has been practised by Indians since time immemorial, and it is done out of gratitude since we know that we cannot survive without trees, says Rambabu. “The leaves and flowers of trees are a part of many rituals and ceremonies.”

In India, conservation and preserving natural resources has long been an important part of the cultural ethos, particularly in remote rural and indigenous populations. Many of these communities see themselves as part of a spiritual thread that connects them to their natural surroundings, revering unique plants, animals, rivers and mountains as their ancestors. 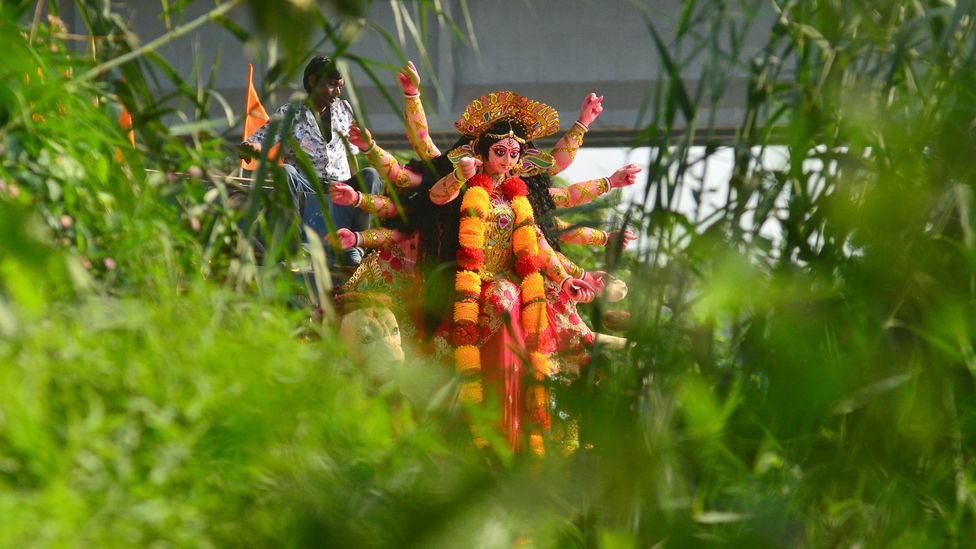 Many rural communities in India see themselves as part of a spiritual thread that connects them to their natural surroundings (Credit: Getty Images)

The preservation of groves is the result of strong ancient beliefs that any damage to the grove would anger the deity living there. Worshippers believe that the deity will take revenge on an intruder who desecrates the grove’s integrity. Snakes are a symbol of rebirth in India and are especially protected. It is believed that if one snake is killed, many snakes will be reborn to take revenge on the culprit.

“Villagers believe every creature has its right place,” says Annu Jalais, associate professor at Krea University in Andhra Pradesh and author of the book Forest of Tigers, about the Sundarbans, vast mangrove forests home to many sacred groves. “They don’t take the environment or the resources for granted. They worship the forests as it gives [local people] everything they need to lead a sustainable life.”

Hindu and Muslim fisherfolk visit the Sundarbans to worship the goddess Bonbibi who they believe protects them from tiger attacks. The forests are home to diverse species such as bear’s breech, nipa palm and mangrove apple, along with threatened animals like the fishing cat, estuarine crocodile, common otter, monitor lizard and Ganges river dolphin.

The Gharo and Khasi tribes of north-east India protect their sacred groves from any human interference. They consider the groves sacrosanct and refrain from picking fallen fruit and foliage. Meanwhile, the Gonds of central India forbid cutting down trees but permit the use of their fallen pieces in the sacred groves. “There is a strong belief that when left untouched, the gods protect the communities with health and prosperity,” says Jalais.

Reflecting on the local sacred sites in his community, Rambabu agrees. “Whoever worships the mother goddess and takes care of nature will always be protected by her.” 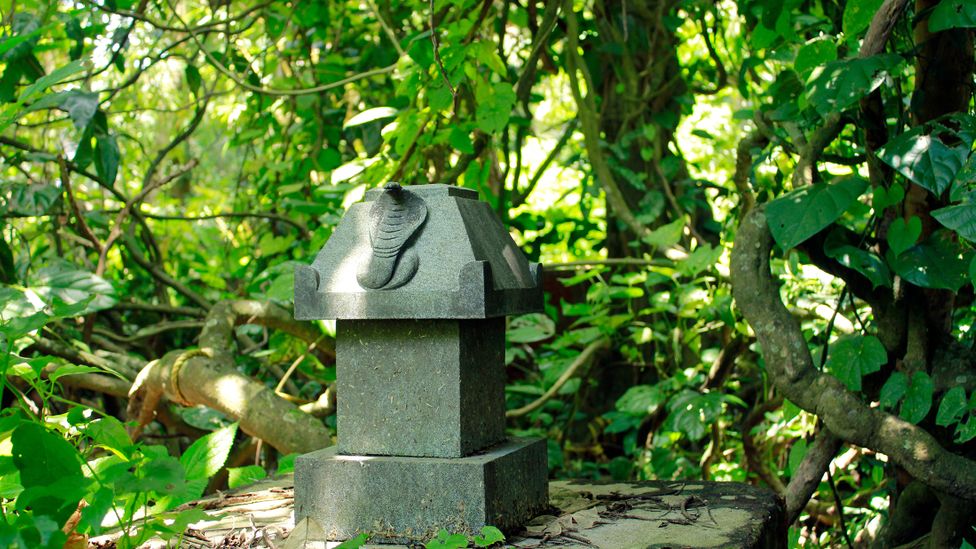 Snakes are a symbol of rebirth and are revered and protected across India (Credit: Alamy)

Some local environmental organisations, such as the Applied Environmental Research Foundation (AERF) in Pune, are working with communities to conserve and restore neglected sacred groves. To date AERF has restored 80 sacred groves. “Unless we create some mechanism where people see the benefits of conserving sacred forests, the forests will not remain for our next generation, it’s important for us to do something on ground,” says Archana Godbole, a botanist and director of AERF, who has been conserving sacred groves for 30 years.

By collaborating with local communities and teaching them about the ecology of the groves, AERF has helped protect four species of endemic and near-threatened hornbills in sacred groves across the western Ghats, protected pangolins, and conducted research studies on oilseed species and medicinal plants.

AERF also helps rural communities make an income from conservation initiatives and incentivises them to preserve 25 sacred groves. For example, AERF was able to encourage communities in the north-western Ghats to abandon destructive logging in favour of sustainable gathering of the baheda trees’ commercially and medicinally beneficial fruit. For the locals, this provided a more reliable source of income, and the partnership helped protect four species of hornbills, who build their nests in the giant baheda trees.

“With the help from AERF, I have started collecting and processing baheda fruit and this has given me a livelihood,” says Santosh Bhide, who lives in a village near Pune.

India has ambitious plans to sequester the equivalent of 2.5 to 3 billion tonnes of carbon dioxide by 2030 by increasing the current tree cover by 25 to 30 million hectares (97,000-112,000 square miles). According to India’s 2021 forestry report, the country’s forest and tree cover spreads across 81 million hectares (312,742 sq miles).

To meet India’s long-term climate goals, increasing tree and forest cover is critical. The Indian government is fostering action on the ground by encouraging the plantation of mixed indigenous species like shrubs, herbs, grass and other tree species, through its National Afforestation Program and Green India Mission. Of the total funds released towards afforestation programmes under this mission, 82% have gone towards planting forests, with the remainder going towards maintenance and monitoring.

But deforestation, urbanisation and industrial development are undermining these efforts.

Despite these trends, many sacred groves still remain largely intact, conserving rich biological diversity and acting as important carbon sinks, drawing down emissions from the atmosphere.

There are 1,214 sacred groves in Kodagu in the south-western state Karnataka. These are said to be home to over 165 different deities. Over the past 15 years, the area has shrunk due to encroachments like towns and agricultural fields, says Sathish Battrahalli Narayanappa, assistant professor at the College of Forestry in Kodagu.

But the remaining land is in excellent condition compared with the shanty town, says Battrahalli.”The [community] believe that if they protect the grove, the deity will protect them. [This] has ensured conservation of the groves.” 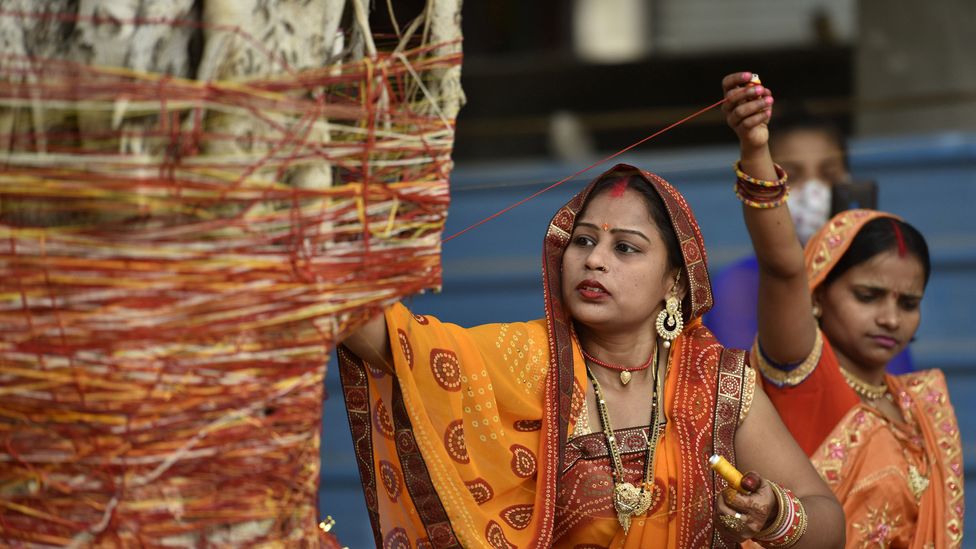 Sacred groves are incredibly rich in biodiversity and tree species, according to a 2018 study. There were 144 tree species recorded in sacred groves in the central-western Ghats, compared with 91 species counted in rural forests in the region, the researchers noted, adding that the high biodiversity helps maximise carbon sequestration. Plant diversity has been shown to boost productivity and the amount of carbon stored in the soil due to the increased likelihood of having highly productive species present and more efficient use of resources.

One study found that two urban sacred groves, Deorali and Enchey in Sikkim, north-east India, absorbed and stored almost double the amount of carbon compared with a naturally regenerating forest over 35 years.

“Local communities’ contributions, such as the custodians who safeguard the sacred groves and manage the traditional rituals attached to their community deity, are crucial in maintaining this healthy environment,” says Jalais.

The community believe that if they protect the grove, the deity will protect them – Sathish Battrahalli Narayanappa

Devrai Foundation, an environmental non-profit in Pune in western India, is involved in building man-made sacred forests, known as devrais. To date they have preserved 119 species of plants, including the giant crape myrtle and Indian coral tree, also called pangara or flame of the forest.

The foundation plants a variety of tree species which used to be abundant but have disappeared because of construction work. It also has a seed bank from which it donates free seeds to anybody interested in growing a sacred grove in India.

“Local people’s participation is very important to conserve these habitats and groves,” says Raghunath Dhole, founder of the Devrai Foundation. “We educate the locals about the steps to be taken and the benefits of becoming guardians of the sacred groves.”

There are sacred ponds attached to temples in many of India’s sacred groves. These ponds are important habitats for wildlife like turtle, crocodiles, ducks and fish in the groves and also act as natural carbon sinks when they accumulate organic matter and absorb carbon. Some of these have been responsible for the protection of certain endangered species of turtles, crocodiles, and the rare freshwater sponge.

Wherever there is a sacred grove, you will find water, says Battrahalli. “The ground water levels don’t dry up, even in the summer,” he says.

This provides rural communities in drought-stricken parts of India with a steady water supply, including during the recent heatwaves, and boosts harvests for farmers. 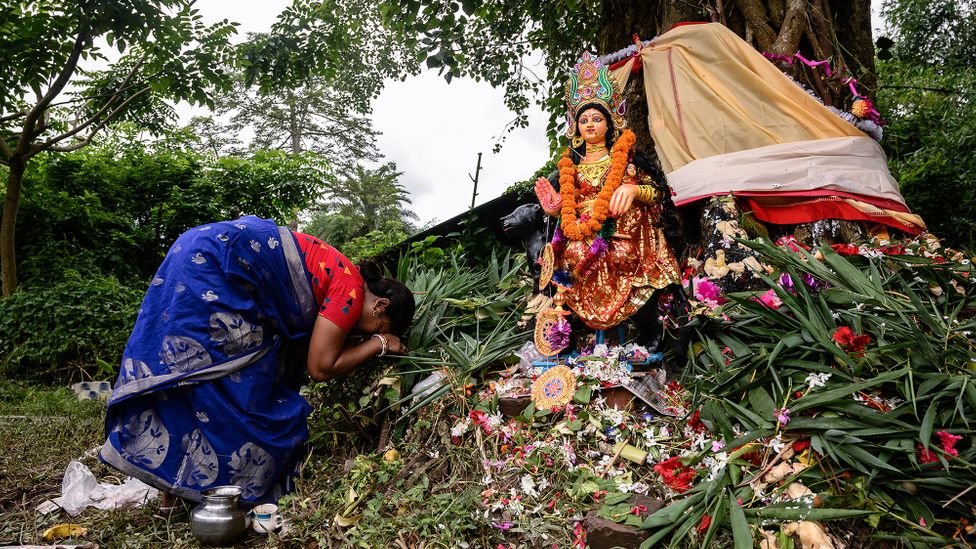 “Wherever sacred groves are in good shape, people get sufficient water supply throughout the year which supports their livelihoods,” says TV Ramachandra, coordinator at the Center for Ecological Sciences in Bangalore. “Farmers earn 124,000 rupees ($1,650, £1,272) per acre per year, which comes down to 32,000 rupees ($425, £328) per year due to deforestation.”

While traditional beliefs conserve sacred groves, developments have sprung up around many sacred sites in recent years.

The Manil Ayyappa sacred grovewas once spread across 25 hectares (62 acres) in 2000, but now only covers two hectares (five acres). The remaining land has been turned into a town. “They built big temples and now many people come to pray and because of this the trees have disappeared and lots of rubbish is thrown around,” says Baddam Nookaraju, a devotee at a sacred grove in Andhra Pradesh.

There have also been questions around the commercialisation of the sites and building larger temples, says Ramachandra.”Earlier there was a link between conservation and tradition, and the idols were worshipped to minimise the damage to sacred groves, but now the very essence of conserving the sacred groves has been lost due to commercialisation,” he says.

Battrahalli sees the greatest threat to groves as deforestation for agriculture, fuel, infrastructure development and poaching.

“Many people from nearby villages come to cut firewood and there is always the danger of poaching – we cannot always keep guard,” says Nanjappa Gowda, who lives in a village in Kodagu.

Nanditha Krishna, an environmentalist and president of the C.P. Ramaswami Aiyar Foundation in Chennai, says sacred groves are vital for protecting local biodiversity in India. But she stresses that we cannot rely on sacred groves alone, as these provide only fragments of habitat.

“Fragmentation of forests threatens species and plant community composition,” she says. “There is a danger of degradation at the edges and interiors of patches due to fragmentation.”

“Sacred groves are useful in that they can play a vital role in meeting India’s climate targets. If each village has a few hectares of sacred forest, they would definitely improve the local [environment],” says Krishna. “They are not a complete solution, but a partial [one] for protecting our biodiversity and also crucial to fight climate change.”

Her temple is surrounded by banyan and peepal trees (sacred figs), with squirrels running up and down their trunks and birds cawing away. “People make wishes and tie red-coloured threads to the tree’s hanging roots, seeking blessings of the goddess,” says Anyam Sridevi, Rambabu’s wife.

Here’s all the ways bleaching destroys your skin and health

A Ghanaian view of the Queen’s funeral: ‘They march, we dance’

!Khwa ttu invites all South Africans to join them for a Heritage Festival, on Saturday, 24 Sept